We Don't Give A Tinker's Damn

Tinkers were the traveling tinsmiths of yore, and are often conflated nowadays with Tinkerers. Tinkerers are America's darlings, an allegory gone all rumpled shirt. Their emissions, however, are not for the feeble of heart. Familiar objects and parts are stacked in the corner, lit on fire, garbled via the transmitter, stuffed in a backpack, glued to something else - this is how the best of things begin. 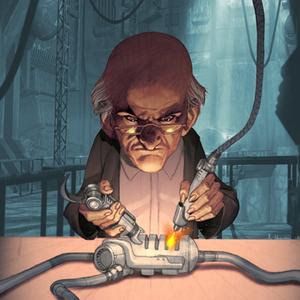 Phineas Mason, aka "The Tinkerer" from Marvel Comics' Spiderman series

In Jack Hitt's book Bunch of Amateurs, he writes that if you are today's tinkerer, or maker, you are adept at, "setting aside of all presumptions that you have, and look(ing) at something as if you've just seen it for the first time." (The Lab, as you all know, drools over this idea.) Throw it all out the window, throw it at the wall, throw the baby out with the bathwater. If you're a tinkerer, you're ok with less specialization, give much more interesting answers to the "what do you do?" question at parties.

For one: Thomas Jefferson invented household tools, studied animals, fossils, and botany. While dabbling in theology, he "cut all the miracles out of the New Testament because he thought Jesus made a whole lot more sense without the supernatural material mucking up the good moral philosophy.” On the side, he helped run the country.

If you were a great tinkerer of his time, you maybe swore a lot.  A tinker's damn, as far as Victorian cussing went, was of little significance, as tinkers were reputed to curse so freely and often. Similar to a hoot, no real harm came of not giving one.

If you were to be a great tinkerer of any era, you might also want a garage.

Mike Nesmith's mom's White Out: perfected in a garage. And out of garages, many other ubiquitous things came ...the song Louie Louie, The Kinks, Credence Clearwater Revival...Google, Harley Davidson, the Maglite company. The first modern garages appeared in the 1920's, but it was the post-war 1960's garages that were attached to the house, and ripe for slip-out-there-late-at-night work sessions. Before the 1920's, inventors had been relegated to their carriage houses, alongside the horse and buggy.

Alexander Graham Bell set up his first lab inside the carriage house behind his father's home in Washington, D.C.  And back in the mid-1880's Guglielmo Marconi started conducting experiments in his father’s home (garage?) in Pontecchio, Italy. He was soon able to send wireless radio signals over one and a half miles. By 1896 he held the world’s first patent for a system of wireless telegraphy.

Isaac Newton was holed up at home for a couple of years waiting out the plague, so he whiled away the hours by aiming sunlight through a glass prism, casting a spectrum on the wall, and positing that white light was not a simple entity but a mixture of rays refracted at slightly different angles - from this, he constructed a reflecting telescope. (We up here on the hill are grateful for our Nellie.)

---
In The Savage Mind French anthropologist Claude Lévi-Strauss called tinkerers "bricoleurs," said they employed the characteristic patterns of mythological thought: in contrast to engineers' creative thinking, which moves from goals to means, mythical thought re-uses available materials to come up with new, innovative solutions. Following up on this idea, philosophers Gilles Deleuze and Félix Guattari, in their 1972 book Anti-Oedipus, said bricoleurs follow the classic patterns of the schizophrenic producer, one who is uncertain of what is real, and instead follows his/her own notions.


Exciting. A little off key.
.
Like the tinker-y Tom Waits tune.

Have a good weekend, all, in garages big and small.


filed under: UnEarthed, Cognitive Dissonance, Tinkerer
Posted by armchairgalactic at 3:33 PM No comments:

I Am The Bread Man

My memories of childhood summer roadtrips are golden. The sticky-hot car seat, warm air twisting through my hair as the Subaru barreled down the highway, and the endless reams of CB chatter between us, my dad's best friend (in a little Rabbit revving a few lanes over), and all the truckers in between. A cool lake was waiting at the end, but for us, the joy was lingering in the airwaves.

Take your name and place it in the palm your hand. Familiar letters, stumbling obediently into place - that's you. It introduces you, signs your emails, does the job faithfully...it's unlikely, though, that it is as effervescent as your CB persona.

Hearing a trucker's name, their "handle", blaring through a CB is an intimate moment. "This is Rubber Duck...Snakebite...The Frenchman...Phox Mulder...Teddybear..." Some handles are self-chosen, others bestowed by fellow drivers. Either way, across the low-lit audio realm, a self floats toward you.

If this declaration of a pseudonym is followed by a friendly warning of something in your path - "Bear with a Hair Dryer" (police car with roadside radar), "Gator Sunning in the Road" (blown tire lying in your freeway lane), or "Little Cheese" (school bus), the exchange is leaning toward downright familial. The medium is old-time radio. The conversation can meander, and a post-modern life story emerges: favorite restaurants, end-of-the-world theories, role of religion in the family, dirtiest-jokes-you-can-drum-up, jibes at fellow truckers, and then back to radio silence for letting thoughts ramble as one rolls down a dark stretch of highway, middle of nowhere.

The story always begins with a name, though, naked, Sun at its back, surfing the radio waves out to the farthest reaches of the Universe.

---
Exoplanets abound, and there's the possibility of water and alien life around every corner. Fermi's Paradox reminds us it's unlikely they're going to answer, but still we, NASA, SETI, try.

When the Pioneer 10 and 11 spacecrafts were sent off in 1972-3, Carl Sagan requested they carry a plaque to tell other life forms of our existence. The people looked friendly enough, but the man's salute raised questions. Some feared the contents would send the wrong message; television had begun beaming images of Hitler's raised hand into space back in the mid 40's, and it didn't seem prudent to hail back to an unsavory personality.

Then, in '77 the Voyager 1 craft went bounding toward our outer Solar System carrying the Golden Record, a soundtrack and accompanying photos to relay more extensively our biology, language and cultures, along with some "universal" math (Sagan had a hand in this one, too). The images are each startlingly germane to only a milli-slice of what it means to be human or to live on Earth; it is somewhat worrisome to guess at the story someone from far, far outside might extrapolate: Admittedly, it is hard to imagine what the perfect montage might be.

It is impossible to express all that we truly are with limited technology, or limited word count, but we could always do well with a tender moment of reflection before we holler hellos up onto new folks' porches. Social media provides minute-by-minute updates on all our real or imagined selves - soundbytes, tons of photos, stuff we think is interesting or funny (yes, we are complicit). Do we see more of each other this way? Are we well represented?

Which self should we usher into the Universe when we let fly our next communication - yawp, tweet, Wilhelm Scream...? Too much pressure to decide. Instead in the Lab today we're keeping it
low-fi, checking in about each others' latest CB monikers.

**update on 5/25/14 - NASA just released its new ebook on how to communicate with alien life forms. 300 pages! Hefty in all ways - we've skimmed through a bit - grander titles include: Inferring Intelligence: Prehistoric and Extraterrestrial, and Speaking for Earth: Projecting Cultural Values Across Deep Space and Time.


filed under: Scream Booth, Messenger, Simulacra, Naming
Posted by armchairgalactic at 8:54 AM No comments: