Hyperbole's leanest definition might be "exaggeration." The Roman rhetorician Quintilian called it, "an elegant surpassing of the truth." It's Greek root, hyperballein, is "to throw over or beyond." It suggests a lifting, a fantastic flight.

Recently, we became aware of twin sisters Margaret and Christine Wertheim, Directors of the Institute for Figuring, and their own use of the hyperbolic (the exaggerative and mathematical kinds). They wanted to increase global awareness of environmental threats to their beloved Great Barrier Reef.  They called for individuals and communities around the world to join them in solidarity, and in craft, and Hyperbolic Crochet Coral Reefs began to emerge. 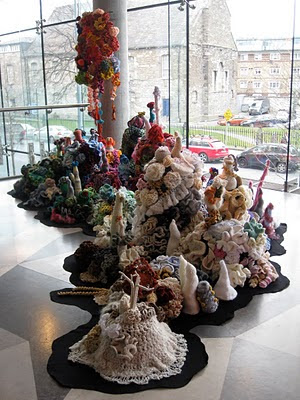 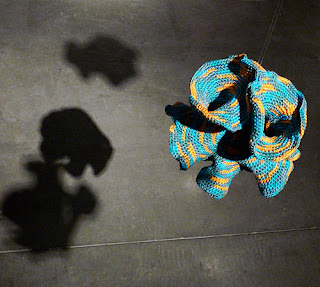 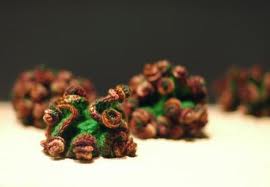 The collective Hyperbolic Crochet Coral Reef not only looks like a real reef, it has the same underlying geometry endemic to the ocean. Many marine organisms - kelps, corals, sea slugs, nudibranches - contain hyperbolic geometry in their anatomies. In her, A Field Guide to Hyperbolic Space:  An Exploration of the Intersection of Higher Geometry and Feminine Handicraft  , Margaret Wertheim tells a backstory with gumption:

“For two thousand years mathematicians knew about only two kinds of geometry – the plane and the sphere. But in the early nineteenth century they became aware of another space in which lines cavorted in aberrant formations. Offending reason and common sense, this new space came to be known as the hyperbolic plane. Although the properties of this space were known for 200 years, it was only in 1997 that mathematician Daina Taimina worked out how to make physical models of it. The method she used was crochet.”

Science is an attempt to explain, in straightforward terms, the world we experience. Hyperbole blows the doors off of placid description. They are an unexpectedly fruitful pairing. Max Planck pictured gas molecules in our Sun behaving like little springs, oscillating away, each spewing forth specific colors of light. Einstein daydreamed about riding on a photon of light.  Jules Verne's science fictional Nautilus later inspired submarines and deep sea exploration. Between fiction and fact lie the slightly uncomfortable spaces where we are "thrown over and beyond," vaulted into wondering - if this is the Planet of the Apes, if firemen light fires or put them out, if we are Soylent Green.

In our research in the OpenScienceLAB we have learned that when people place themselves in somewhat of a fictional context, they are more able step outside of what they know or believe, be more imaginative and, importantly, listen to the ideas of others. Science benefits from this kind of letting go.

Over 5,000 people throughout the world have participated in the Hyperbolic Coral Reef thus far. Needles flying, they all responded to the plight of the reef. Through quirky, woolly craft, wild spires and fringe, they learned about its mathematical underpinnings.  "Offending reason and common sense," it was crochet that brought science to the masses.

Bully for you, me, and everyone who gets to experience this kind of science, Hyperbole.
Posted by armchairgalactic at 9:13 PM