The Sampled Circles of Hell

Eons ago, I wrote a PhD dissertation. It's appropriately mothballed now, but the question that led me to write it still feels germane: How do women see, and reflect, themselves when science is declared "not theirs"?

In the paper, 18th century British midwives were the main characters, passing skeins of intimate medical knowledge by word of mouth, rustling up healing herbs, and bringing intention and acuity to the unbridled process of birthing. To grossly over-simplify what happened next: in the viewpoint of a world that was steam-powered piston-ing, industrial weaving itself toward perfection, the midwives were seen as far from perfect. Enter the menfolk. They doctored in the newly minted hospitals, and had cleanliness, regulatory credentialing, and impressive new midwifery tools in their favor. 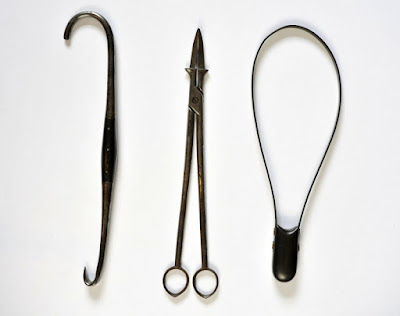 Knowledge was transferred from the midwives to the medical profession, and it would be nearly two hundred years before it began to make its way back again. How had the women interpreted the subtle shift in their landscape when childbirth - once entirely their domain - was whisked away? I made a visual map, parsing out the women's geography, concentric circles radiating outward: at the center, "natural knowledge" (biology) of their own bodies, then, moving out - clothing, rooms they occupied in the home, outdoor athleticism, travel, aspirations. There was a hellish side to their constraints; my circles were a nod to Dante: 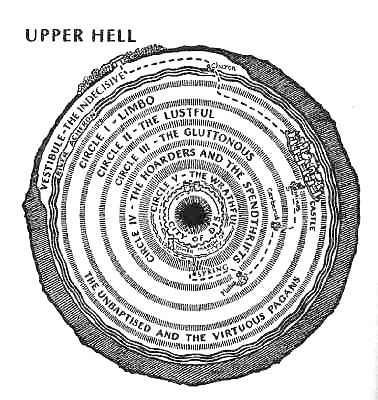 What song of science-led oppression wouldn't be more poignant with a bit of hell thumping underneath it?

Those who are "sampled" experience a letting go, have their intimate creativity or knowledge taken in some way. As the midwives learned, it can be flattering, but oppressive when it is involuntary.

We couldn't help it - we left the midwives (they're on the slow rise again, as you well know) and decided to end with some tidbits from the history of sampling in music:  The craft started out harmlessly enough - at the beginning of radio, genre-jumping riffs included industrial noise, radio shows being spliced together, the unbelievably funky thrumming train samples of Pierre Schaeffer and Pierre Henry's 1940's "musique concrète." Then, in 1956 Dickie Goodman and Bill Buchanan rolled out their Flying Saucer, a slapstick mashup of popular rock and roll hits with a fake news report about aliens landing on Earth. (Feathers were ruffled.) In 1961, James Tenney's Collage #1 clipped and re-engineered Elvis Presley's Blue Suede Shoes. It went on, and then there was hip hop...we'll leave the entire awesome history of sampling and dispute for to you to discover, but here's a treat for the road: a DJ Shadow bit from his Endtroducing, the first album made entirely of samples.

It's late afternoon here in the Lab. We're kicking around ideas. Super-dorky project: What would a song sampled from the history of science sound like, one that crooned about loss of power via patriarchy? A nice start: lines from Linnaeus' sexualized botany books, and Donna Haraway's cyborg manifestos.

...and this month, we should add some vocals, a little #YesAllWomen hook.

Posted by armchairgalactic at 3:22 PM