Mother Nature has a growing catalogue of images of herself done up in style - weird, snarling, matronly, demure - you name it. We think we'd now include this video.

(Thanks, biologist Stanford Chen, for alerting us to this!)

There are so many ways a Westerner can celebrate Nature. Maybe a solstice festival. A sustainably-farmed-pig roast. A salty ship's-bow reading of Rachel Carson's The Sea Around Us. Or you could, employing your famous-actress mad skills, your eyes wide like a doe's, dress up like a hamster and birth, then munch on, your babies. We are not sure we want to show this video to our young children. We are very sure we watched it more than once. We're laughing. We're thinking about the heft of biology, the efficiency of the food chain, how glad we each are not to have a loose cannon hamster mother. We're also chagrined, shifting in our seats; we're just as red in tooth and claw as she is, that wonderful teacher of biology, fuzzy Ms. Rosselini.

Mother Nature's debut as a character in the western world began as early as the 3rd millennium BCE, on Mesopotamian writing tablets which personified Nature as creative and nurturing, suggesting a feminine side. Greek pre-Socratic philosophers then summed up the entirety of the natural world's phenomena in the word physis, and presented the idea of Nature as a singular entity. The one, feminine icon began to take hold, but medieval Christians couldn't allow her dominion over everything (that's God's job) and conceded only Earth as her stomping grounds. Then, the Enlightenment. The explorers, the naturalists, the academics - all wanted to dig in and examine Nature, taxonomize it, tame it and translate it, sounding their barbaric YAWPS over the rooftops, but you can't do that to God's property. So Victorian scientists utilized enough sexual metaphors to once and for all draw a neat line betwixt Mother Nature and God and created a feminine domain, ready to be studied and exploited. Linnaeus, taxonomer extraordinaire, when describing reproduction, talked about trees and shrubs "donning wedding gowns" before their "nuptials." Adjectives including "chicks," "foxes," and "old hens" became common ways to describe women...and so on.

Jump to 1972. Mother Nature's starring in a television commercial, flowers in her hair, holding a tub of margarine. 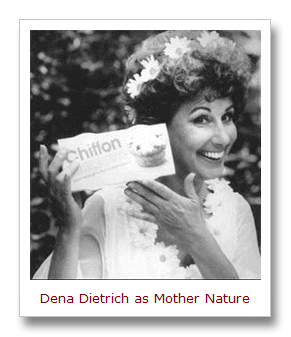 When she mistakenly praises the contents as her own, lovely, natural butter, an offscreen narrator rudely disabuses her of this notion, revealing the identity of the tub in hand - Chiffon Margarine. She responds by meting out some punitive thunder and lightening, along with the trademarked slogan, “It’s not nice to fool Mother Nature.”

Given the state of Earth (we'll not get into specifics, but merely hail back to the popcorned seat from which we first saw on screen a raucous version of the Desert of the Real)... Mother Nature, mammas, mamalia, it's all food for thought, i'nnit?

Posted by armchairgalactic at 2:53 PM