Arm Around a Monster

In photos, when you drape an arm around someone's shoulder, lean your head in toward theirs, it says something about what they mean to you. 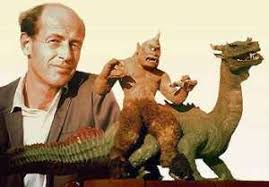 If that special someone happens to be a monster, the message could still be that you care and, in this case, that they are also your legacy to the world. Ray Harryhausen, animator and special-effects wizard, died on May 7 of this year. He was 92. He is cited by George Lucas, Steven Spielberg, James Cameron and Peter Jackson as a creative inspiration for their films, and the eponymous Harryhausen’s restaurant in Pixar's Monsters, Inc.
is a nod to his genius.

Throughout his career he created rollicking good monster-stomps-through-city films, like Beast from 20,000 Fathoms, in which a hibernating rhedosaurus jolted from its slumber by an atom bomb tramples downtown Los Angeles, and 20 Million Miles to Earth (1957) wherein a 30 foot tall Venusian whomps along the streets of Rome. He lured monsters up from the sea (It Came from Beneath the Sea) and down from the skies (Earth Versus Flying Saucers). He was famous in certain circles. He made the pterodactyl that carries off Raquel Welch in “One Million Years B.C.”, and as a teenager formed a friendship with Ray Bradbury, spending hours talking with him at a local science fiction club.


He plied his art through monstrosity and biology, and was a master of film; an interdisciplinary craftsman. We salute him, and in memoriam say:


Everyone out there should use their imaginations so fervently. Everyone should be so lucky, to have the opportunity to dig down and dredge up a beast or two to share. And in some epilogue, somewhere, each of us should have our arm around a monster.
Posted by armchairgalactic at 4:43 PM